Give the gift of art this year with CanvasPop + #Giveaway

I don’t normally condone violence between my kids, and we try to solve disagreements with words. But there are some fights that we, as a family, can sometimes be found indulging in. If you see us in McDonalds, don’t be alarmed to see french fries and straw wrappers being tossed around the table (we always clean up after ourselves, a condition for these bouts of sillies), and at home when we are silly, just about anything soft can be used as a projectile; balled up socks, foam blocks, stuffies. My son, as a toddler, would randomly shout “Bum fight!!” and start tossing his clean diapers at us out of the box. We are that family. And now that my son is a little older, we are a Nerf family! So when we got a chance to #playlikeHasbro and test the new Nerf N-Strike Elite Rhino-Fire Blaster, all four of us were hoping to take the first shots.

Dubbed the Weapon of Mass Destruction in our house, the N-Strike Elite Rhino-Blaster is a double-barreled, motorized, Blaster that can certainly dominate any battlefield. Fed by two that drums hold 25 darts each (50 Elite Darts included), the controlled motorized action of the Rhino-Blaster allows you to launch a flurry of darts at your targets up to 90 feet away.

Dominate any battlefield with the double-barrel assault of the Rhino-Fire blaster! You can launch a blizzard of darts at targets up to 90 feet away from the blaster’s two barrels, and its motorized firing puts you in control of the rate of fire! The blaster’s 2 drums hold 25 darts each, and comes with 50 Elite Darts. Remove the tripod when you’re on the move or attach it to steady your shots when you’re firing from a secure location. You’ll overwhelm the competition with the motorized, rapid-firing Rhino-Fire blaster! 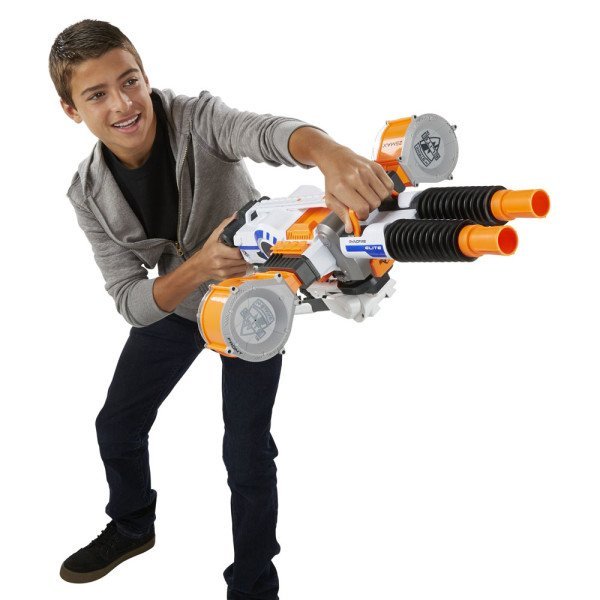 Nerf’s N-Strike Elite Rhino-Blaster also comes with a tripod, which is pretty handy because this thing is massive, and a little weighty so it really helps steady your shot, but be sure you’re in a secure location before setting up! The tripod is easily set up and the Blaster attached, and is a snap to disassemble if your position is compromised and you need to move. Because of the Rhino-Blaster’s size however, it would be very difficult to shoot one-handed.

We definitely had a blast with the N-Strike Elite Rhino-Blaster, and since we own a few other Nerf guns, we’ve had several battles…usually 3 against 1. Something we love about this unit is that the dart drums can be used in other Nerf N-Strike Elite guns (we have the Retaliator), upping your ammo availability considerably. 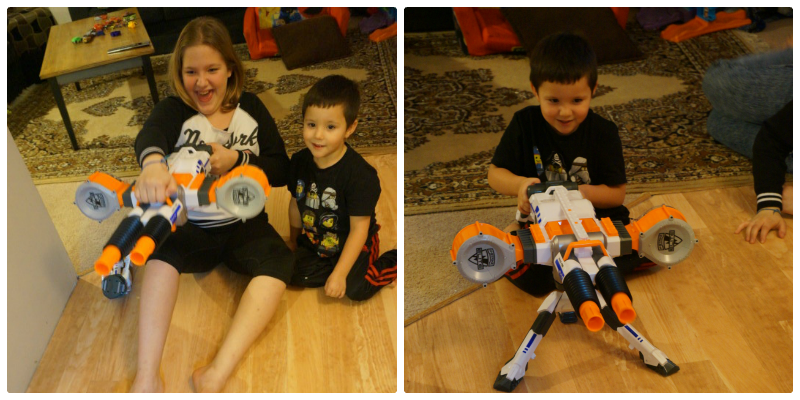 Is there a downside? Well…kinda. While the motorized shooting action is super cool, both to use and to watch in action, the N-Strike Elite Rhino-Blaster requires 6 D cell batteries. We used dollar store batteries to test it out, and they lasted through two battles, so I would recommend using better quality batteries or investing in rechargeable batteries and a charger.

The N-Strike Elite Rhino-Blaster is recommended for ages 8+, and while my son loved using it (who wouldn’t!) it was definitely too bulky for the little guy to handle it. His older sister, however had very little trouble, though there is a bit of a learning curve to shooting live targets with this one, so we did several rounds of target practice first.

It has a suggested retail price of $109.99, but I’ve recently seen them as low as 79.99, and are available at Walmart, Toys R Us, and other places where Nerf is sold.