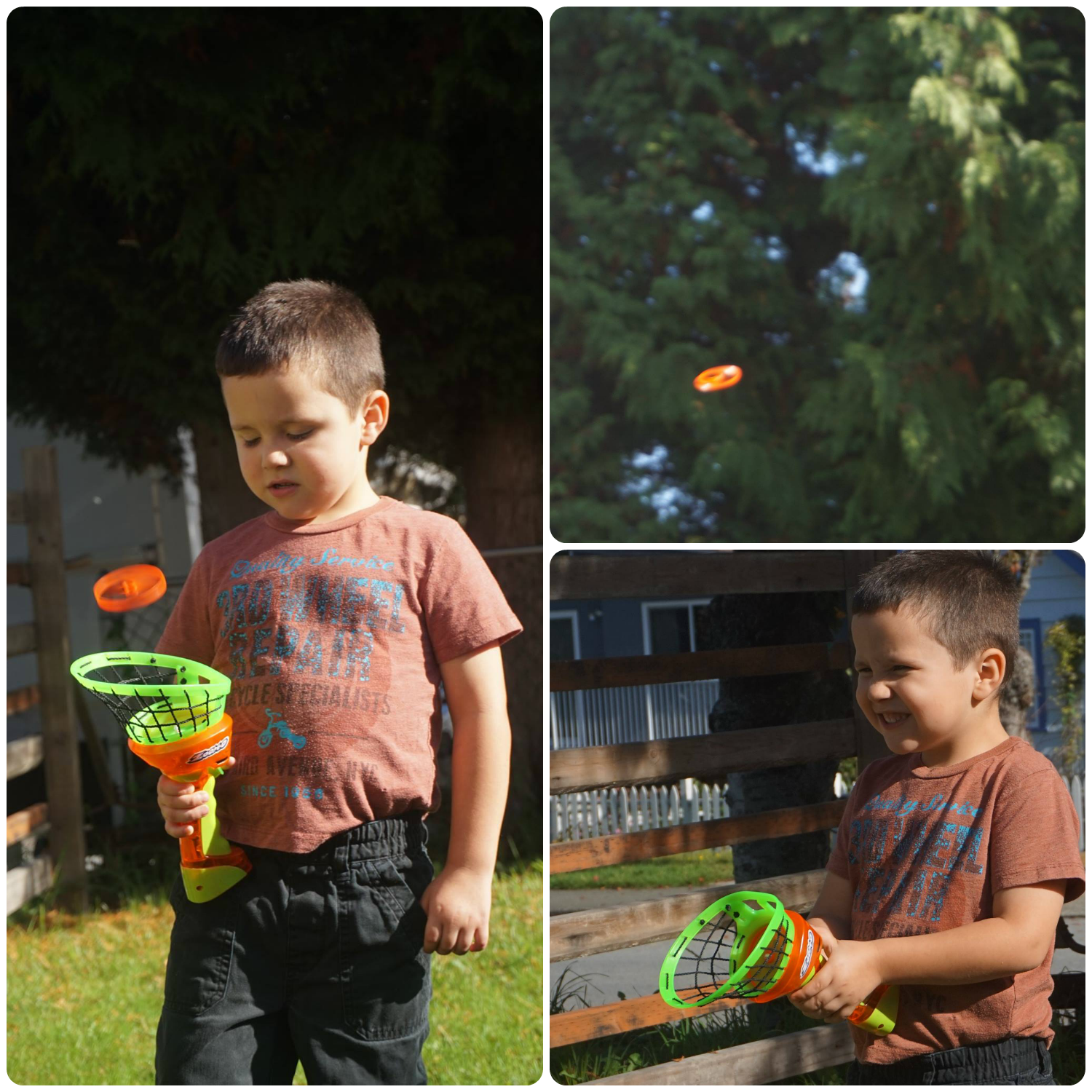 It is not uncommon in schools today to hear the phrase ‘litter-less lunch’, and it can be a little discouraging at first. No more ziplock bags and tetra pack juice boxes. Heck, they even will request that you unwrap prepackaged snacks at home and send them in Tupperware. I have adjusted. Slowly. But for the longest time I refused to send anything but water  as a beverage because any reusable drinking container I found leaked save for stainless steel bottles that are strictly for water only and, well, I just don’t think kids need pure fruit juice at school and I’d rather her eat real fruit. And then we tried Juice in the Box. 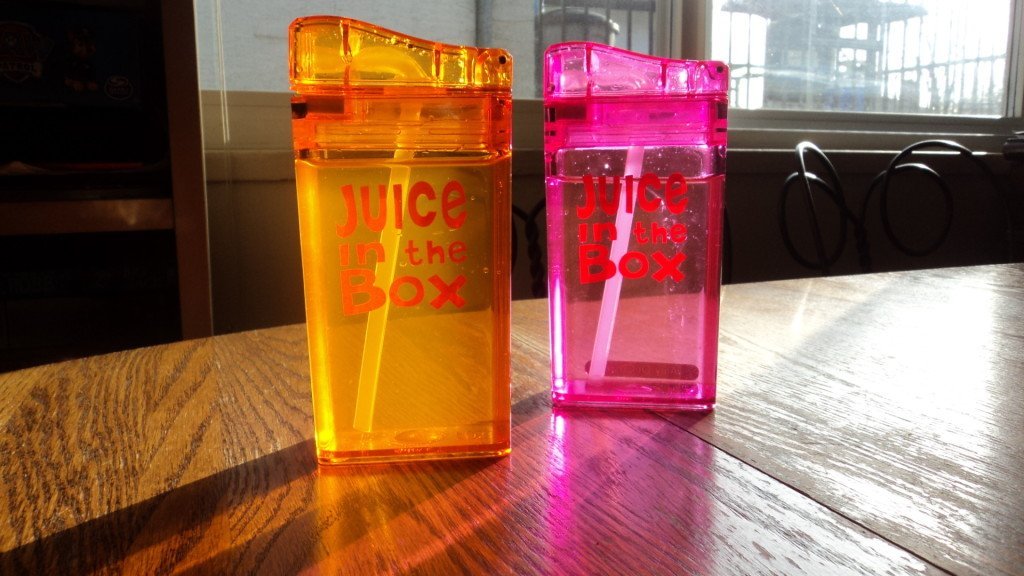 Juice in the Box changed the way I thought about drink containers. They come in five different cool translucent colours and are shaped like a juice box so they easily fit inside a lunch container and are dishwasher safe for easy cleaning. Made of extremely durable Tritan plastic which is both BPA and phthalate free, the container and lid itself are near indestructible. Ours have suffered many a fall (and the occasional throw) onto our stone tile floor and are still near perfect! The seal and spout are a sturdy silicone, which is naturally non porous and will not harbour bacteria, and the soft polypropylene straw is angled for easy drinking right to the last drop. The lid locks and releases with the push of a button and has a handy ‘pinch guard’ to seal the straw when closed to prevent leaks.

While I still send mostly water, it’s nice to be able to treat her once in a while to some juice with her litter-less lunch. It’s even nicer to be able to water it down! Juice, even organic 100% juice not from concentrate, is so full of empty calories and sugary beverages are a big contributing factor to childhood obesity and poor health. Did you know that it takes roughly 3 apples to make an 8oz glass of juice? I wouldn’t let my kids eat three apples in a sitting, so why let them drink it? And they aren’t even getting any of the fiber.

Juice in the Box isn’t just a good choice for our health, but the health of our planet. Tetra pack juice boxes are made of six different layers of paper, plastic, and aluminum. They are actually difficult to recycle, requiring a special process that many places do not have. And, if not recycled, scientists estimate that it will take about 300 years! for a tetra pack juice box to decompose. And if, for example, my daughters school of roughly 400 kids each brought a juice box once a week, that’s 1600 boxes a month, roughly 14,400 juice boxes in a single school year! Yikes! Not only that, but they take resources to make, and energy to recycle. Using a reusable drink container can really make a difference, and Juice in the Box is my favourite by far! 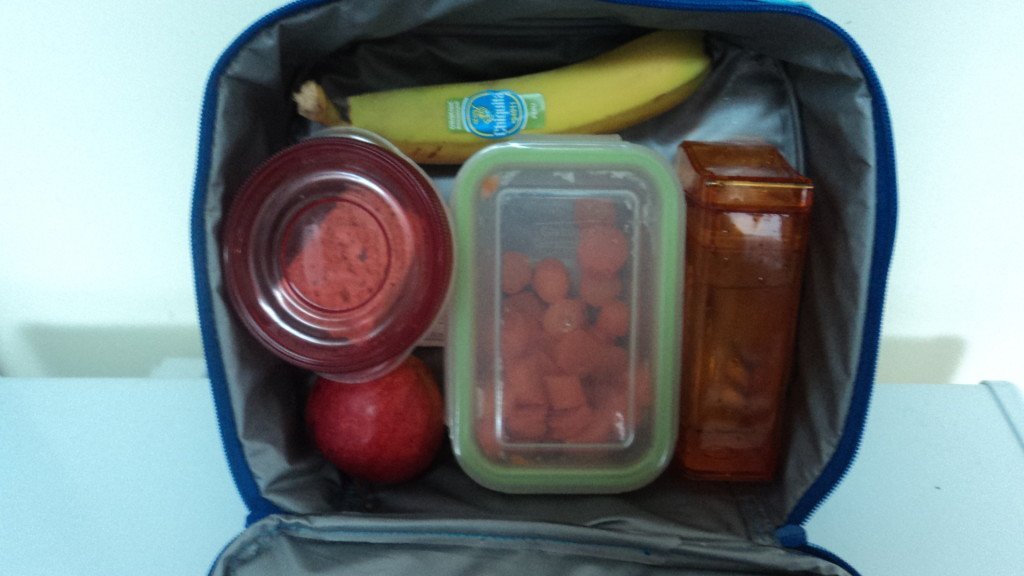 As an added unexpected bonus in our house, our picky 4-year-old has actually started asking to drink water! We’ve tried all different kinds of water bottle styles in effort to get him to drink more…a glass just wouldn’t cut it. Regardless of the spout type or cartoon character on the front, he turned up his nose after a sip or two out of the others. He was pretty stoked to get a bright orange Juice in the Box, and, after optimistically filling it with water, we gave it to him to test it out. He loved it! Straws are his preferred drinking method, so that was a hit for sure, but he nibbles his and most straw type containers will dent, but not Juice in the Box! His favourite part is that he can open it, fill it and close it himself, all without making a mess. My favourite part is that I can finally get him to quench his thirst more naturally.

Juice in the Box would like to give one of our lucky readers the chance to try their very own Juice in the Box reusable drink containers set. Enter below! Open to US & Canada.